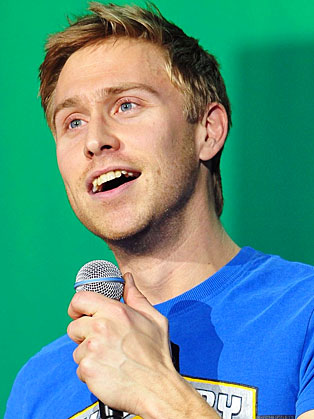 Russell Howard is an English comedian and television and radio presenter.

Russell Howard is an English comedian best known for his TV show Russell Howard's Good News and his appearances on the topical panel TV show Mock the Week.

Russell Howard is one of the UK's most successful comedians. His 2011 sell-out arena tour Right Here, Right Now played to more than 300,000 fans including three sold out dates at the 15,000 seater O2 Arena. He returned to the stage in 2014 with his latest arena tour, Wonderbox, including four shows at the Royal Albert Hall and a string of international dates.

Russell is the writer and star of BBC Three's most successful entertainment show Russell Howard's Good News. The 8th series began in Spring 2013; since its debut in 2009 cumulative ratings have grown from 1.7 million a week to a peak of over 5 million. The success of the show saw it move to BBC Two in 2014.