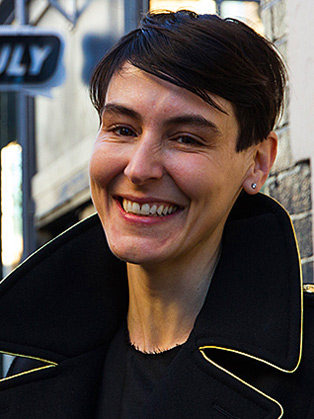 Sarah Wood OBE is co-founder and CEO of Unruly.

Sarah Wood OBE is co-founder and CEO of video ad tech company Unruly, where she ensures the company delivers the most awesome social video campaigns on the planet. Sarah was named one of 15 Women to Watch in Tech by Inc. and one of 10 London-Based Entrepreneurs to Watch by Forbes.

Sarah Wood OBE is co-founder and CEO of Unruly, the video ad tech company. Unruly gets videos seen and shared across the web, working for brands that want to move people not just reach them, bringing emotional intelligence to digital advertising.

Sarah has been recognised for her work in the tech industry and for her entrepreneurship. She is Veuve Clicquot’s Business Woman of the Year, voted Best CEO at the 2016 Europas Awards and City AM’s Entrepreneur of the Year in 2015.

A regular on the Today Programme, BBC News, Sky and ITV, Sarah is in demand as a commentator on the technology industry and business as a whole.

When speaking at corporate events, Sarah can cover topics from the future of technology to women in business, as well as telling her own remarkable business story.

Her new book, Stepping Up: A leadership handbook for the generation that wants to rip up the rule book will be published by Pearson/FT in the Autumn.

Sarah was awarded an OBE in 2016 and has been named among the 500 most influential people in Britain today.

Sarah is an inspirational keynote speaker on all things digital, disruptive technology as well as women in business.