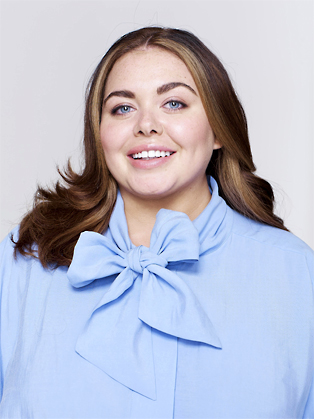 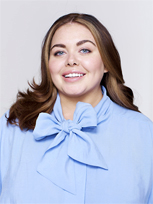 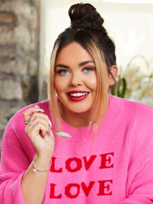 Scarlett Sigourney Moffatt is an English television personality, author, entrepreneur, presenter, and former ballroom dancer from County Durham, best known for appearing in the Channel 4 programme Gogglebox before being crowned Queen of the Jungle on I’

Down to earth, honest and full of life Scarlett is your perfect Presenter, Host and superb Fireside Chat speaker. Scarlett’s rise to fame started with C4 series Gogglebox where she won the hearts of the nations. As the winner of 2016’s I’m a Celebrity..Get Me Out of Here, she went on to present on Ant and Dec’s Saturday Night Takeaway and many more. Sunday Times No.1 bestselling author she faced size bullying criticism widely on social media and the press. Scarlett worked alongside Dermot O’Leary at the National Television Awards with a plethora of recent television credits and hugely successful podcast series in 2020 and 2021.

Scarlett has become a regular on TV screens after making the public laugh with her quick-witted humour on Gogglebox before crowning her Queen of the Jungle on I’m A Celebrity.

Her warmth and bubbly personality has led Scarlett to land her a number of presenting roles, including Saturday Night Takeaway (ITV), 2 series of Extra Camp (ITV2) & Celebability (ITV2). Her success in these roles led her to take on Davina McCall’s previous position as host of dating show Streetmate and to work alongside Dermot O’Leary at the National Television Awards.

Scarlett released her debut book Scarlett Says in 2016, which topped the Sunday Times Number 1 Bestsellers list. She followed this up with her second book, Me Life Story, Sofa So Good.

Scarlett and her family starred in the hugely successful Channel 4 documentary The British Tribe Next Door where the Moffatt family moved to live with a tribe in Namibia for a month. It was one of the most talked about shows in 2019 and won a 2020 RTS Award.

In 2020, Scarlett launched her own chart-topping podcast for BBC Radio 1 all about her love of conspiracy theories. Scarlett Moffatt Wants To Believe will be back in 2021 for a much anticipated Series 2, exclusively on BBC Sounds. You can also hear Scarlett as the host of the popular Ru Paul’s Drag Race UK, also for BBC Sounds.

Scarlett’s TV credits include Britain’s Brightest Family, The Ranganation, Joe Lycett’s Got Your Back, Celebrity Game Night, The Great Celebrity Bake Off for SU2C, The Crystal Maze, Richard Osman’s House of Games, Would I Lie To You?, The Lateish Show With Mo Gilligan, Celebrity Mastermind, Who Wants To Be A Millionaire? and most recently as winner of Celebrity Karaoke Club.

Her love of dogs landed her the role as host of Crufts Extra, a brand new Youtube series behind the scenes at Crufts 2020.