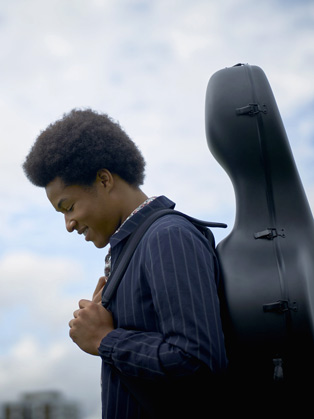 Sheku Kanneh-Mason, one of the brightest young stars on the classical music scene and winner of the 2016 BBC Young Musician of the Year competition, is already in great demand from major orchestras and concert halls worldwide.

Sheku Kanneh-Mason is a British cellist who won the 2016 BBC Young Musician of the Year award. He was the first black musician to win the award since its launch 38 years earlier.

Sheku Kanneh-Mason has been appointed as soloist to perform at the marriage ceremony of Prince Harry and Meghan Markle on 19th May 2018. In January 2018, his debut recording for Decca Classics, Inspiration, was released, featuring the Shostakovich Cello Concerto No. 1 (the piece which won him the BBC title) with the City of Birmingham Symphony Orchestra and Mirga Gražinytė-Tyla. The phenomenal success of the album propelled Sheku to a debut spot at number 18 in the Official UK Album charts, and number 1 in the Classical chart. Alongside short works by Shostakovich, Offenbach, Casals, and Saint-Saëns, Sheku’s own arrangement of Bob Marley’s No Woman No Cry was also featured on the album, and went viral on social media, clocking over 2 million streams on Spotify alone.

In recital, Sheku made his London debut at King’s Place in October 2017 as part of their Cello Unwrapped series. Upcoming recital highlights include debuts at the Barbican Centre’s Milton Court, Wigmore Hall, Zurich Tonhalle, Lucerne Festival, as well as a major tour of North America to include concerts in Boston, Los Angeles, Minnesota and Sheku’s recital debut at Carnegie Hall New York.

In 2017, Sheku made his BBC Proms debut at the Royal Albert Hall as soloist with the Chineke! Orchestra, an ensemble with which he enjoys a special relationship, having taken part in their debut concert at the Royal Festival Hall in 2015 and returning as soloist to perform the Haydn Concerto in April 2017. He is passionate about the importance of making classical music accessible to all and is currently the first London Music Masters Junior Ambassador. From 2018/19, he will become ‘Young Artist in Residence’ at the Royal Liverpool Philharmonic where he will take on a role in the orchestra’s education programme as well as performing in Liverpool a number of times across the season.

Also in 2017, Sheku was awarded the South Bank Sky Arts Breakthrough Award, given by the judges to the most promising young Artist across all genres, following recent winners Billy Piper and Stormzy. He performed alongside Hollywood A-listers in ‘The Children’s Monologues’ at Carnegie Hall New York, a charity event in support of Dramatic Need, directed by Danny Boyle. He also played at No. 10 Downing Street in front of an illustrious guest list for Black History Month and has performed at events attended by various members of the British royal family, including Prince Charles, Prince William, and Prince Harry.

In February 2018, Sheku performed ‘Evening of Roses’ at the BAFTAS Awards show at the Royal Albert Hall. He was joined on stage by four of his six siblings, all of whom perform classical music to an exceptional standard. This was the first time any artist has been invited to perform during the ceremony two years running and followed his memorable performance of Leonard Cohen’s ‘Hallelujah’ at the 2017 BAFTAs, the subsequent recording going viral on you tube.

Sheku is currently a full-time student at the Royal Academy of Music, London, studying with Hannah Roberts. He began learning the cello at the age of six with Sarah Huson-Whyte and then studied with Ben Davies at the Junior Department of the Royal Academy of Music where he held the ABRSM Junior Scholarship. He has received masterclass tuition from Guy Johnston, Robert Max, Alexander Baillie, Steven Doane, Rafael Wallfisch, Jo Cole, Melissa Phelps and Julian Lloyd Webber and in July 2017, participated in the Verbier Festival Academy in masterclasses with Frans Helmerson and Miklos Perenyi. A keen chamber musician, Sheku performs with his sister, Isata and brother, Braimah, as a member of the Kanneh-Mason Trio.