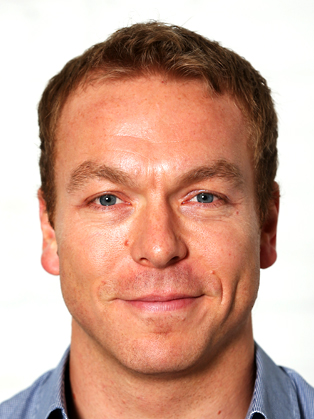 Sir Chris Hoy has long been one of the world’s best known cyclists and in 2012 he found another place in the record books as Team GB’s most successful Olympian, with six gold medals and one silver, making him also the most successful cyclist in history. His passion for cycling started from a young age he truly followed his ambitions to achieve this success. In 2008 he was voted BBC Sports Personality of the Year, and was appointed Knight Bachelor in the 2009 New Year Honours "for services to Sport". In 2012 the "Sir Chris Hoy Velodrome", built for the Glasgow 2014 Commonwealth Games was named in his honour.

Sir Chris Hoy MBE, multiple world and Olympic champion track cyclist, was born and raised in Edinburgh and has been competing in various sports since the age of seven. He raced BMX until he was 14 years old, becoming Scottish Champion and ranking second in Britain and ninth in the world.

Chris also rowed and played rugby for his school, George Watson’s College, throughout his teenage years. He rowed for Scotland as a junior, winning a British Championship silver medal in the Coxless Pairs.

As a senior, Chris turned his attention to track sprint cycling and in 1992 he joined his first cycling club in Dunedin. Two years later he joined The City of Edinburgh Racing Club, the most successful track club in Britain, and since 1996, the 34-year-old has been an integral member of the Great Britain National squad. He won his first world medal in 1999 – a silver in the Team Sprint – and has won 11 world and two Commonwealth titles to date.

Chris won his first Olympic gold medal in Athens 2004 in the Kilo – an event that was dropped from the programme for Beijing 2008. Chris took this in his stride and switched his focus to three other track sprint events – the Keirin, Sprint and Team Sprint. He went on to win a gold medal in all three at the Beijing Olympics, cementing his name in the history books.

Following his historic hat-trick of gold medals at the Beijing Olympics, Chris was voted 2008 BBC Sports Personality of the Year. He was also awarded a Knighthood in the 2009 New Year Honours list, capping an extraordinary year for the track cyclist from Edinburgh.

In 2012 at his home Olympic Games in London, Chris won his fifth and sixth gold medals- in the Keirin and Team Sprint- becoming Great Britain’s most successful Olympic athlete of all time with six gold medals and one silver.