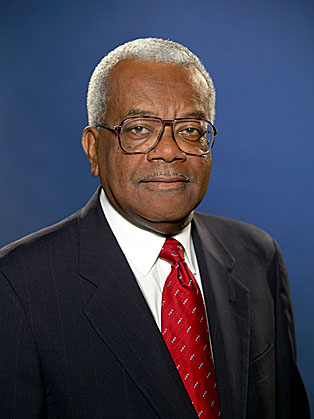 Best known for his multi-award winning role as the Diplomatic Correspondent and Presenter of Channel Four news, and legendary career in the world of journalism and broadcasting.

Born and educated in Trinidad in the West Indies, Sir Trevor McDonald began a career in media as a radio reporter, news presenter and sports journalist. In 1969 Trevor worked as a Producer in the BBC Overseas Regional Service. He then went on to produce Current Affairs programmes for the BBC WORLD Service and in 1973 he joined the ITN as a General Reporter. After travelling all around the globe covering sports and politics, Trevor became the Diplomatic Correspondent and Presenter of Channel Four News in 1982 for which he has received many awards

Sir Trevor McDonald OBE was born and educated in Trinidad in the West Indies where his career in the media began, first as a radio reporter, news presenter and sports journalist. On his first major assignment there, he was sent to London (1962) to report on talks at Malborough House which culminated in setting a date for Trinidad's Independence.

Trevor came to London in August 1969 to work as a Producer in the BBC Overseas Regional Service at Bush House in the Aldwych. He went on to produce Current Affairs programmes for the BBC WORLD Service and in that capacity worked on the initiation of a number of shows like THE WORLD TODAY which are still part of the BBC World Service schedule.

In 1973 he joined ITN as a General Reporter. His first major assignment was in Northern Ireland where he covered the Province's ' troubles' for more than a decade. He also reported from Dublin, Rome, Brussels, Strasbourg and Luxembourg on negotiations about the terms of Britain's membership and earliest days of the then Common Market - now the EU.

Covering sport and politics Trevor McDonald travelled to Argentina, Australia and the West Indies before becoming Diplomatic Correspondent and Presenter of Channel Four News in 1982. In that capacity he reported from every Continent, covering events and conducting interviews in Egypt, Israel, Syria, Lebanon, Libya, India, Pakistan, Japan, New Zealand, Mexico, South Africa, the Soviet Union and Hong Kong. During this time he also worked extensively in the United States reporting on the unfolding events at the United Nations during the Falklands War, from New York and from Washington, as well as covering a number of Presidential and Congressional Campaigns. Trevor reported on Soviet Communist Party Conferences from the time of President Brezhnev and returned to Moscow and to Washington to report on East West Summit meetings, prominently among them... those between Reagan and Gorbachev. His coverage of the ' people power ' Philippine Elections in 1985 won a BAFTA Award for Channel Four News.

When not working abroad, Trevor McDonald began his career as an ITN Presenter. He has anchored every ITN News programme - from what used to be the News at One, the News at 5.40 and 6.30 to the flagship and award winning News At Ten. And not just from London, but from news locations around the world.