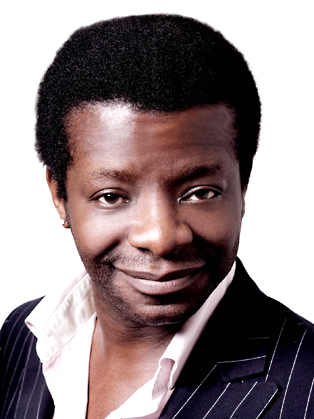 Stephen K Amos has charmed and entertained audiences all over the world with his natural, assured delivery and his honest, original material.

Instantly likeable, Stephen K Amos has built a reputation as a peerless compere, a popular stand up and an acclaimed comic writer. He's also been this star of his own BBC2 sketch and stand up show. A gifted actor, Amos has impressed audiences and critics with his performances on stage and screen and has proved not only a gift for comedy but also for more serious roles. Comfortable as a performer, presenter, actor and guest there is no doubt that Amos will retain his position as one of the nations favourite comedians for a long time to come.

A gifted actor, Amos has impressed critics with his performances on stage and screen and has proved he is one of the most unique comedy voices of his generation but demonstrated a penchant for drama roles. Comfortable as a performer, presenter, actor and guest there is no doubt that Amos will retain his position as one of the nation's favourite comedians for a long time to come.

Stephen had another busy year in 2017. He presented the critically acclaimed documentary Prejudice and Pride on BBC Four, with Susan Calman. He took two shows to the Edinburgh Fringe; a work in progress of his new tour as well as bringing back the fan favourite Stephen K Amos Chat Show to the Gilded Balloon.

He wowed the crowds at the Glastonbury Festival, recorded an episode of QI and the Museum of Curiosity.   His new tour Bread and Circuses began in November.

Stephen's first book - I Used To Say My Mother Was Shirley Bassey  - is a memoir of a lifetime of fitting in, standing out, and (almost) always laughing.

In 2015, Stephen concluded his National UK tour with a two week sell-out run at Soho Theatre before taking his show - Welcome To My World - across Australia and New Zealand. Having gone so well, Stephen announced his first European tour of the show before going straight into his new show, The Laughter Master (2015-16).

The Laughter Master has since toured the UK, Australia, and New Zealand and has been booked for it's own European tour.

In 2014, Series Three of Life: An Idiots Guide was commissioned.  Stephen also took What Does The K Stand For? to Australia and New Zealand.

2013 saw Stephen tour the UK, Australia and New Zealand with his hit show, The Spokesman. Continuing Stephen's tradition of generating new and unique shows, he performed a Work In Progress at the Edinburgh Festival Fringe, alongside his live talk show.

In 2012, following his success of past years, Stephen once again travelled to Australia, this time to perform his new show, Laughter Is My Agenda, at all of the major festivals as part of an Australian tour. He then returned to the world renowned Edinburgh Festival Fringe with a new Work In Progress which was a total sell out; before doing a full UK Autumn tour. Alongside this, Stephen also recorded the second series of his hit radio series Life: An Idiots Guide for BBC Radio 4.

In 2011, Stephen embarked on his Best Medicine tour, performing his solo show to sold-out crowds around the country. He also appeared in Dave's One Night Stand. And in 2010 Stephen starred in his first TV series - The Stephen K Amos Show - for BBC Two. Meanwhile, his second DVD The Feelgood Factor was filmed at the Hammersmith Apollo!

His debut DVD Find the Funny, recorded at the Enmore Theatre in Sydney, was released November 2009.