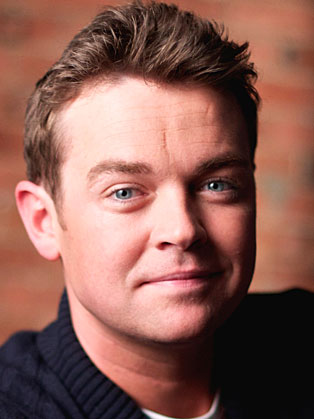 Stephen Mulhern is firmly established as one of the most popular young presenters in the business.

As well as television, Stephen Mulhern is an experienced stage performer, having appeared in numerous theatre productions including Grease where he played Danny Zucco.

The highlight of Stephen’s stage career to date was being invited to appear on The Royal Variety Show at the Victoria Palace Theatre in front of The Queen and The Duke of Edinburgh.

Stephen has written a TV series for Channel 4 called ‘Freaky’. He has not only created the show but was the executive producer.

After completing a sell out Christmas and New Year run of the panto Mother Goose, 2007 began with Stephen back on ITV2 with the second series of the hit show Dancing on Ice: Defrosted and Tricky TV also returned for its second series. In June, Stephen hosted another flagship show for ITV2, Britain’s Got More Talent, which proved to be a huge success.

2009 saw Stephen return for a third series of Britain’s Got More Talent which got amazing viewing figures; it was the highest rated multi channel programme at that time.

2011 saw ‘Do The Funniest Things’ return for its 9th series on ITV1, Stephen once again hosted the Britain’s Got Talent Tour on the back of a hugely successful fifth series of his hit ITV2 show Britain’s Got More Talent. He then signed up to return to the brand new Marlowe Theatre in Canterbury after being invited back to appear as Buttons in Cinderella due to popular demand.

2012 kicked off with the return of Britain’s Got More Talent, as well as the return of his fabulously successful variety show tour at the Butlins resorts of Minehead, Skegness and Bognor throughout the summer. Stephen can be seen as a regular member of ITV1’s This Morning team, and he continues to work closely with ITV on various new projects.