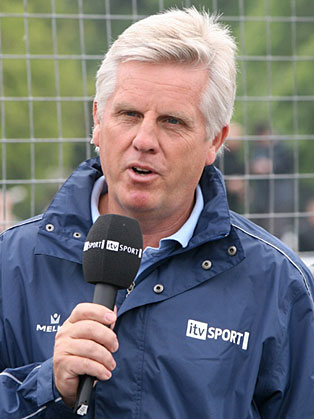 Steve Rider is a sports presenter and broadcaster and anchorman of a vast range of football coverage for ITV.

Steve Rider is an English sports presenter, and was the anchorman of ITV's football coverage, which included the Champions League, England Internationals, the FA Cup and the 2006 World Cup.

In 1980 Steve Rider made his network debut as presenter of ITV coverage from the Moscow Olympics and he is the only television journalist to have presented all of the major sports magazine programmes of British Television.

Steve Rider has a journalistic background both in local newspapers and press/public relations, but his television career began at Anglia, where he was Sports Editor. Two years later he joined Thames Television where he was widely regarded as one of ITV sports top presenters and reporters.

Having hosted Commonwealth Games and Winter Olympics, he is one of the stalwart Olympic presenters – Barcelona 1996, Sydney 2000 and was the main anchor for BBC’s Olympic coverage in Athens 2004.

Steve presented “The Cricket World Cup” in 1999 and three major documentaries on “The Open” for the BBC during 2000. He presented the award winning documentary on Ayrton Senna and Motormonth a weekly look at motor racing around the country. 1998 saw Steve host Wimbledon and front the Whitbread Round The World yacht race. He has hosted the Boat Race for several years and the BBC’s rowing coverage.

He developed the BBC’s domestic motor sports profile and pioneered the highly successful British Touring Car Championship through BHP and has since become strongly involved in corporate video and presentation for the motor industry.