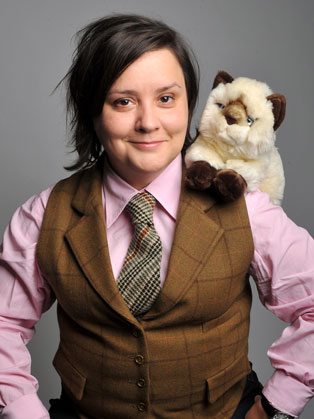 The corporate lawyer turned comedian made the move to full-time stand up when clients started to attend her gigs. She hasn’t looked back, enjoying critically acclaimed Edinburgh shows, standing in for Mr MacAulay on Radio Scotland and guesting on The News Quiz and The Unbelievable Truth.

Feisty Glaswegian Susan Calman gave up a lucrative career in corporate law to become a comedian and has since proven to be one of the fastest rising stars in comedy.

After starting comedy as a hobby, Susan turned her back on her life as a barrister when she noticed more and more clients turning up to her gigs. Deciding this was a difficult professional balancing act to maintain (especially when clients provide so much material), Susan successfully embraced a comedy career. She reached the semi-finals of the BBC New Comedy Awards, was a finalist in the prestigious Funny Women competition, and won Best New Comedian at The Real Radio Scottish Variety Awards.

Her sharp, clever take on life, relationships and law proved a hit beyond her native Glasgow and Susan went on to perform sell-out shows at the Edinburgh Festival, the Magners International Comedy Festival and Leicester Comedy Festival. She also became resident compere at Glasgow's most famous comedy club, The Stand.

Susan has since become a regular co-presenter with, and stand in for, Fred MacAulay on his BBC Scotland show. She also frequently appears on Radio 4, in particular on The News Quiz, Just A Minute, and The Unbelievable Truth. As an actor, Susan has also appeared in Rab C Nesbit and BBC3’s cult sit-com How Not To Live Your Live.

In 2017 Susan competed in Strictly Come Dancing and were eliminated in the 10th week of the competition.