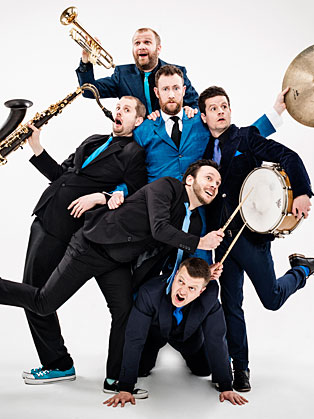 The Horne Section is a live music variety show which has been broadcast on BBC Radio 4.

Gathering together the UK’s finest musicians and throwing them on stage with the world’s most exciting comics, Alex Horne has created something truly unique: The Horne Section. This is potent comedy, a heady mix of spontaneous stand-up, spectacular performance and outlandish musical talent. Hot on the rhythmic heels of their very own BBC Radio 4 series and three years of sell out shows in the West End and across the world, The Horne Section bring their indomitable late-night festival fanfare back to Edinburgh.

Alex Horne is the creator and host of The Horne Section. Together, Alex and his five piece band create a heady mix of stand-up comedy, cabaret performances and live music with special guests such as Ed Bryne, Jimmy Carr, Greg Davies, Tim Minchin and Al Murray. The Horne Section has had sold-out runs at the Edinburgh Festival in 2010, 2011, 2012, 2013 and 2014 as well as at The Soho Theatre, Lyric Theatre – Shaftesbury Avenue, The Criterion Theatre and The Hackney Empire. In 2011, The Horne Section was commissioned to make a one-off special for BBC Radio 4, the success of which led to a full series broadcast in spring 2012 and a second in 2013.