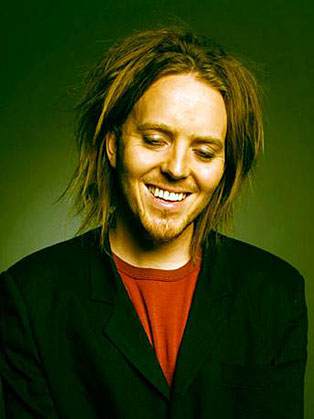 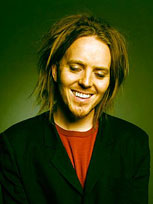 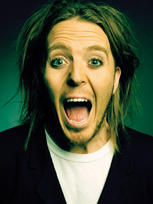 Tim is an award winning, world-class comedian and musician, best known for combining the two in his unique brand of musical comedy.

Tim Minchin is an Australian musician, composer, songwriter, actor, comedian and writer. In his performances, he typically goes barefoot with wild hair and heavy eye makeup, which is juxtaposed with a crisp suit and tails, and a grand piano. His current songs span various musical styles and topics such as environmentalism, rationalism, prejudice(ism), logical fallacies(ism) and his amour de fromage et de boobs(ism). During 2009 and 2010, Tim wrote the music and lyrics for Matilda The Musical with the Royal Shakespeare Company. This adaptation of the Roald Dahl classic ran, from November 2010 until January 2011.

Tim Minchin is an Australian musician, composer, songwriter, actor, comedian and writer. He has been performing his unique brand of musical comedy in front of appropriately excitable and ever-growing audiences since starting out in South Melbourne’s Butterfly Club in 2005. He won the Directors’ Award at the Melbourne International Comedy Festival for his break-out show Darkside, and followed this later the same year with one of the most successful debut acts ever at the Edinburgh Fringe – winning the Perrier Award for Best Newcomer. Many more awards followed over the years, and without wanting to go on and on about it, he’s done some pretty successful live shows since then too, often in Australia or the UK, but also on the North American continent (yes that includes you too Canada). But not you Guatemala. Maybe one day.

His current songs span various musical styles and topics such as environmentalism, rationalism, prejudice(ism), logical fallacies(ism) and his amour de fromage et de boobs(ism). In fact, it would hardly be over the top to say that his love of boobs would be up there in the back of Plato’s cave in the bit that’s carved out for the most perfect and complete example of the love of boobs. But not in a weird way. He plays the piano, always nicely and oftentimes uproariously and excitingly, whilst looking wonderfully athletic in a pair of delightfully uncomfortable skinny jeans. As well as his grand piano and apparel befitting a style guru, Tim is joined onstage by his iconic dance moves, wildly teased hair, gently calmed eyebrows, natural aplomb and his enormous… sense of occasion.

During 2009 and 2010, Tim wrote the music and lyrics for Matilda The Musical with the Royal Shakespeare Company. This adaptation of the Roald Dahl classic ran, from November 2010 until January 2011, in Stratford-upon-Avon and transfers to London’s West End in October 2011. Tim embarked on his first Arena tour of the UK, joined by the 55-piece Heritage Orchestra and a band, in December 2010. He took the show to Australia in early 2011, performing with the state symphony orchestras all over the country, including four sold out dates with the Sydney Symphony Orchestra at the Sydney Opera House. The fourth of these shows was recorded and broadcast live on Australian TV by ABC2. He returned to the UK for some more arena dates with the Heritage Orchestra in April and May 2011, including two dates at The Royal Albert Hall. Tim Minchin And The Heritage Orchestra Live At The Royal Albert Hall was filmed for DVD, and will be available

towards the end of the year. June and July 2011, Tim has dates in various cities across the US. He’ll also be performing at several festivals in the UK and the US in 2011.

Tim has made many TV appearances, the most recent of which include his first US TV appearances on Conan (11/10c on tbs) and The Late, Late Show with Craig Ferguson (CBS) in January 2011. In Australia, 2011, he was interviewed and performed a cover of the Crowded House classic ‘Better Be Home Soon’ on Adam Hills In Gordon St Tonight (ABC1), and he performed a new song ‘Lullaby’ with part of the Melbourne Symphony Orchestra on Ben Elton’s Live from Planet Earth (Channel 9). In the UK, in 2010, Tim joined Robert Llewelyn for Carpool, hosted an episode of Never Mind The Buzzcocks (BBC) and appeared on Genius (BBC) and 8 Out of 10 Cats (Channel 4). He’s also performed on radio; his most recent project being Strings, a brand new comedy sitcom pilot for BBC Radio 2, which he both wrote and starred in. He also joined the regulars for an episode of The Infinite Monkey Cage on BBC Radio 4 in 2010.

His acclaimed 9-minute beat poem, Storm, has been animated and previewed at TAM London in October 2010. It was made available to all on YouTube in 2011, following some film festival fun. He narrated Shaun Tan’s Oscar winning film The Lost Thing, an animated 15 minute short, based on the children’s book of the same name.

Tim is an Ambassador for The Prince’s Foundation for Children and the Arts and ran a Half Marathon in 2010 on their behalf.