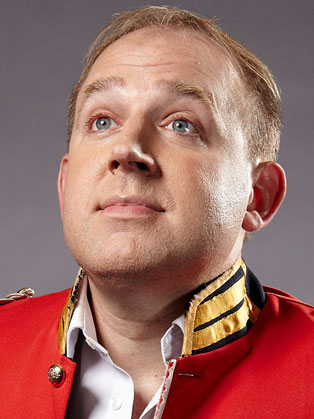 Tim Vine is an award-winning comedian who holds the world record for the most jokes (and laughed at) told in an hour: 499.

Tim Vine is an English writer, actor, comedian and presenter, known for his role on the BBC series Not Going Out until his departure in 2012. He has released a number of DVDs of his stand-up comedy and has written several joke books.

Tim Vine was born in Surrey and is brothers with Jeremy Vine, a Radio 2 presenter.

Tim’s stand up act consists of primarily quick-fire one-liners and puns and is a regular at Edinburgh Fringe Festival where he won the award for funniest joke with “I’ve just been on a once-in-a-lifetime holiday. I’ll tell you what, never again.” He also won the Perrier Best Newcomer Award and was shortlisted for the main Perrier award and for Time Out’s New Act of The Year.

He also co-starred in the sitcom Not Going Out alongside fellow comedian Lee Mack and has appeared on Live at the Apollo and the Royal Variety Show. In addition, Tim has three sell-out tours, DVDS and a joke book to his name.