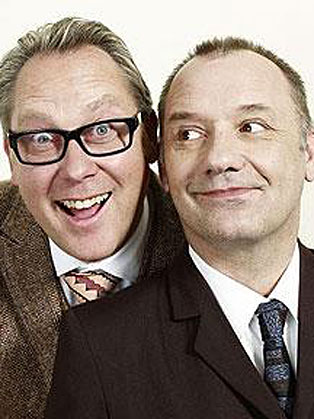 Vic Reeves and Bob Mortimer, more commonly known simply as Vic and Bob or Reeves and Mortimer, are a British comedy double act whose comedy career stretches over 25 years.

Vic Reeves and Bob Mortimer are a British comedy double act who have written and starred in several comedy programmes on British television since 1990.

It is all infused with an anarchic energy and a deliberate, knowingly exaggerated edge to the performance. Their act is more versatile than many double acts who rely on the straight man/funny man dynamic. Often Mortimer will be the exasperated foil to Reeves' eccentric buffoon, or Reeves will play blankly bemused or annoyed to a manic or hyperactive Mortimer.

They forged a status for themselves as "the alternatives to alternative comedy" in the late 1980s and early '90s. Their style of performance is unique, while still managing to exert some influence on British comedy.

In a 2005 poll The Comedian's Comedian, the duo were voted the 9th greatest comedy act ever by fellow comedians and comedy insiders.